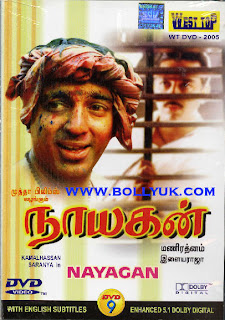 This is one of my favorite films of both Kamal and Maniratnam. I heard that the inspiration for Kamal’s character came from a real person who lived in the treacherous slums of Dharavi – Mumbai. I believe this is also an adaptation of the all time famous classic gangster film “The Godfather” (but the exact adaptation of the film would be Devar Magan).

Nayagan is one of the best acting that Kamal has done or Maniratnam has brought out of him, you can say it either way. The journey of a common man to an underworld Don was shown in a very meticulous way. The change in the body language, talk and mannerisms of Kamal was astounding and the make up was also perfect. I liked the scene where the policemen flush out water on him but he just stands still and after that when the corrupt policeman asks if Kamal wants to beat him, Kamal just says “Nan adicha nee sethiruva” (If I beat you, you will die). From that one scene Maniratnam establishes the courage and fearlessness of the character Kamal is playing.

Another scene that is etched in my memory is in the climax where Kamal’s grandson asks him “Neenga nallavara kettavara?” (Are you a good person or a bad person?) For which he says “Theriyiliyappa… (“I don’t know …)This scene still brings out the tear in my eyes every time I see it. The third major contributor to the success of this film is the Genius, called Ilayaraja.No one can deny the fact that especially his background score for the movie, just enhanced the scenes much more. This film is regarded in the West as one of the best adaptations of “The Godfather” and also has been voted in the Times list as one among the best 100 movies of our time. I am eagerly anticipating the coming together of the “Awesome threesome” (Kamal, Maniratnam and Ilayaraja) for another movie, as would many of their fans. This is my tribute to these greats and to this once in a lifetime film.
Posted by satishk at 6/08/2010 11:39:00 AM

Deals of the day